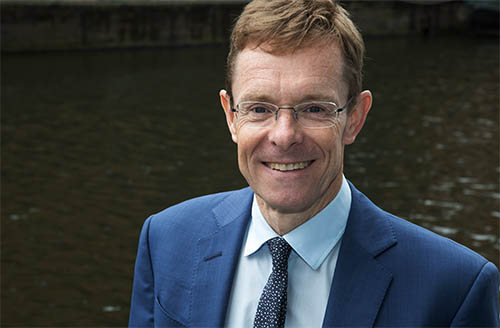 As in business, my approach to being Mayor is all about understanding the challenge, having a plan and delivering on it.

It means having a plan around transport (such as reopening railway lines to passengers, extending the Metro network and providing a step-change in investment in cycling and walking).

It means understanding how we can completely eradicate youth unemployment in the West Midlands.

It means understanding how Government and the West Midlands Combined Authority can support the major industrial sectors that we already lead the way in – such as advanced engineering – and emerging sectors with huge potential – such as life sciences.

But it also means representing and championing the West Midlands on a national and global stage. It’s something that I had to do as managing director of John Lewis, be the centre-forward for the business, and is something I would relish as Mayor.

Andy Street has combined a career with John Lewis with a host of high-profile economic development roles, working with local and national government.

Starting on the John Lewis graduate scheme, Andy rose through the ranks to become Managing Director, overseeing one of the most successful periods in the company’s history.

He was the Chair of the Greater Birmingham & Solihull Local Enterprise Partnership between 2011 and 2016.

Additionally, he has been lead non-executive director for the Department for Communities and Local Government as well as a member of the Prime Minister’s Business Advisory Group.

Outside of work, Andy is passionate about the arts, particularly in the West Midlands. He is Vice Chairman of Performances Birmingham Limited, which is responsible for running the City’s Symphony and Town Halls.